Cash Bandits 3 is a 5×3 bank robbing online slot by RTG. Once again, we are tasked with breaking into a high security bank. Helping you pull off the heist is the vault special feature and two progressive jackpots. This title has a high variance, allowing for rare but massive wins to occur.

WHERE TO PLAY CASH BANDITS 3

We recommend Slotocash Casino to be your partner in crime for this game. They offer plenty of other Real Time Gaming titles while being open to US players.

To win, simply land three or more identical symbols in adjacent positions, starting with the leftmost reel. This winning combination must follow an active payline, or its cash prize will not be paid out.

The theoretical return to player (RTP) in Cash Bandits 3 sits just shy of 96%. Keep in mind the RTP will vary depending on the online casino you are playing with. 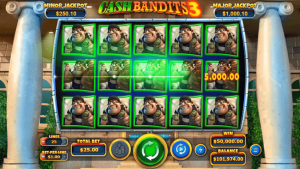 You can find thirteen different icon designs on the paytable. These include the bandit Wild and the slot’s logo serving as a Scatter.

The Wild also plays the role of the most valuable symbol in this game. It is worth 5000x for a five-of-a-kind win. On the opposite end are donuts, a megaphone and handcuffs. These are the lowest paying icons, and are worth 100x for a five-symbol win.

Three or more Scatters on the playing field will activate this bonus. It will reveal six vaults and a keypad. Each vault has a corresponding code needed to open it. You try to open the vaults by guessing what numbers are part of the code. Three Scatters grant you five or six number picks. Four and five Scatters grant seven and eight number picks, respectively.

Each vault contains a number of free spins and a multiplier inside. These add up with each vault you crack open. Opening all vaults means you will win 390 free spins which are played with a 23x multiplier. Not an easy feat to accomplish, but incredibly lucrative if you can pull it off.

Every round you play has a chance of triggering a progressive jackpot win. There are two jackpots in Cash Bandits 3: the minor and major jackpot. Jackpots are triggered randomly and are added on top of any other wins you may have achieved. The random jackpot contribution is no more than 1.5% of the total return to player.

Compared to its two predecessors, you can see a definite visual upgrade in this slot. The character models are now 3D. We were neutral on them at first, but they grew on us as we kept playing.

The game keeps its most iconic special feature ready for players to enjoy. Combined with the progressive jackpot, most players will be quite happy to play this release. We had a blast playing it, and we know you will, as well.